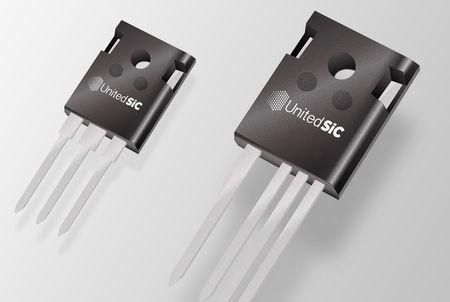 UnitedSiC, a manufacturer of silicon carbide (SiC) power semiconductors, is introducing four new SiC FETs, with RDS(ON) levels as low as 7mohms, delivering unprecedented levels of performance and efficiency for use in high-power applications such as electric vehicle (EV) inverters, high-powered DC/DC converters, high-current battery chargers and solid-state circuit breakers. Of the four new UF3C SiC FET devices, one is rated at 650V with RDS(on) of 7mohm, and three rated at 1200V with RDS(on) of 9 and 16mohm series devices. All are available in the versatile TO247 package.

These new SiC FETs combine a high-performance third-generation SiC JFET and a cascode-optimized Si MOSFET. This circuit configuration creates a fast, efficient device in a familiar package that can be driven with the same gate voltages as Si IGBTs, Si MOSFETS and SiC MOSFETs. In addition, to optimize high-temperature operation, silver sintering provides low thermal-resistance mounting for the TO247 package.

- What is really significant here is that we have achieved the industry’s lowest RDS(ON) for any device in this class, explains Anup Bhalla, VP of Engineering, UnitedSiC.
- But in addition to that, the standard drive characteristics and versatile packaging mean these SiC FETs can be used as drop-in replacements for less efficient parts in a wide variety of applications, with little or no additional design effort.

For lower-power designs, UnitedSiC offers two parts with maximum operating voltages of 1200V, drain currents of up to 77A, and an RDS(ON) of 16mohm. The UF3SC120016K3S has a three-lead package, while the UF3SC120016K4S has a four-lead package.

The low RDS(ON) characteristic of these devices make it possible to achieve efficiencies of more than 99% in inverter designs. The excellent reverse recovery performance helps in this regard, along with the low conduction drop of in the freewheeling mode.

Inverter designers will be able to extract more power from their existing designs without reinventing their basic circuit architecture, by switching at the same speed but handling higher currents without excessive resistive heating.

The low switching losses allow designers to operate the inverter at higher frequencies in order to produce a cleaner output current waveform. This improves the efficiency of the motors it drives by reducing their core losses. If the inverter is designed to have a filtered output, higher frequency operation will enable smaller filters.

The ultra-low conduction losses enabled by the low RDS(ON) figures of the UF3C series SiC FETs mean the devices can also be used as solid-state circuit breakers and battery disconnect switches in EVs. The devices can turn off very high currents very quickly, and when used as a circuit breaker have a self-limiting characteristic that controls the peak current that flows. This characteristic can also be used to limit inrush currents flowing into inverters and motors.

The UF3Cseries SiC FETs can form the basis for more efficient high-current battery chargers. For lower battery-voltage systems, the UF3SC65007K4S offers much greater efficiencies in charging circuits than IGBT-based systems. If SiC FETs are used to build a synchronous rectifier to replace the secondary-side diodes, this also dramatically cuts losses and so reduces the cooling burden on the charger.