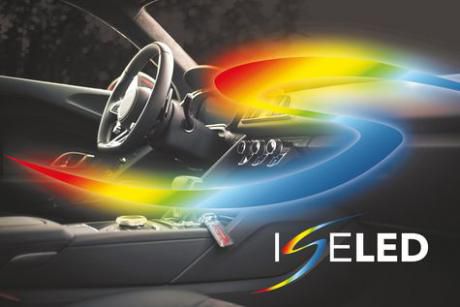 Following ISELED's official debut at electronica 2016, this innovative technology based on a true 'digital LED' has experienced enormous acceptance in the industry. This is also reflected in the development of the ISELED Alliance, which has set itself the goal of offering a comprehensive system solution - an ecosystem - around ISELED.

From initially five members in autumn 2016, the number of Allianz members has increased to 28 companies. The entire value chain is now covered in order to establish ISELED as a standard solution - in future also beyond the confines of the automotive industry.

- The broad spectrum of the Alliance's members gives ISELED technology ever greater dynamism and enormously expands its potential range of applications - far beyond the original idea of automotive interior lighting, emphasizes Robert Kraus, CEO of Inova Semiconductors and one of the founders of the ISELED Alliance.
- With our new ILaS bus concept (ISELED Light and Sensor Network) based on the ISELED protocol, not only LED elements, but also other components such as matrix LED lights, sensors and actuators can in future be controlled in large numbers via a simple two-wire connection, which is not possible in this form with today's common buses such as LIN and CAN.

The product portfolio of the Dräxelmaier Group for premium cars includes ambient and functional lighting systems, interieur systems, board networks and battery systems for e mobility. The company with headquarters in Vilsbiburg (Germany, Lower Bavaria) was founded in 1958 with today about 70.000 employees in more than 20 countries worldwide.

- As a vendor of premium lighting scenarios for the automotive industry we look at the standardization of interfaces and future proved protocols as a key topic, significantly increasing the opportunities of functional lighting, says Dr. Martin Gall, CTO of the Dräxelmaier Group.

Everlight is a leading optoelectronics provider with a diverse product portfolio consisting of high-power LEDs, SMD LEDs, lamps, lighting components, digital displays, opto-couplers and IR components for various applications. Everlight with headquarters in Taipei, Taiwan is a global company with over 5.600 employees. Everlight Electronics Europe is located in Karlsruhe, Germany.

- We are a global leader in automotive market for both visible and non-visible lighting components.  Everlight is joining the ISELED Alliance with our unique product family, Everlight SMARTLED, says Alex Liu, Senior Director and Department Head of Automotive Product Center of Everlight, and he continues:
- ISELED is meanwhile an established technology, receiving broad acceptance in the automotive market.

Also new to the Alliance is Xingyu Car Light Co. Ltd. based in Changzhou, China, which develops, manufactures and markets automotive LED lamps. Based on a patented technology platform, the Scottish company designLED integrates LEDs into thin and mechanically flexible 'light tiles' without bulky secondary optics and heat sinks for applications ranging from automotive interior lighting to architecture and design.

Headquartered in Nashotah, Wisconsin, Techniplas is a global group of companies providing design and manufacturing services with innovative technologies for a networked world. At CES 2019, the group of companies presented, among other things, a concept vehicle with cognitive light, smart structures and lightweight construction.

The Dr. Schneider Unternehmensgruppe has made itself a name as a specialist for first-class products in vehicle interiors - from innovative ventilation systems to highly integrated trim panels and sophisticated modules for instrument panels and center consoles. The group has its headquarters in Kronach, Upper Franconia and employs more than 4,000 people worldwide.