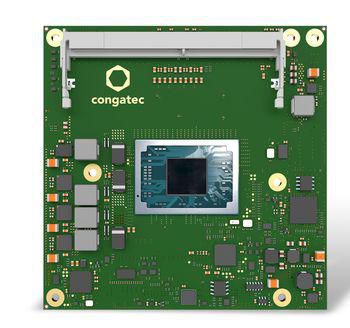 The new congatec conga-TCV2 powered by the new Ryzen Embedded V2000 processor impresses with up to 2x generational uplift in performance per watt, a 2x more CPU cores compared to previous generations, at only 76% of the previous size on a 100% pin-compatible form factor.

The powerful AMD Ryzen Embedded V2000 SoC integrates AMD Radeon graphics, with up to 7 GPU compute units. The performance per watt improvementsi of the new ’Zen 2’ cores used by the CPU are based on the 7nm manufacturing process technology. The architecture optimization also adds an estimated 15% more instructions per clock to this improvement.

With up to 8 cores and 16 threads on a single BGA footprint, the new Computer-on-Modules are great candidates for digitization and parallel-processed edge analytics - including workload balancing and consolidation enabled by virtual machines on the basis of congatec’s RTS real-time hypervisor implementations.

Further application areas include all standard embedded applications, ranging from industrial box PCs and thin clients to embedded computing systems with impressive compute and graphics performance. Other applications include smart robotics, e-mobility and autonomous vehicles that use deep learning to optimize their situational awareness.

- With up to 16 threads, high performance embedded system designs at the edge can now execute twice as many tasks at given TDP ranges, which is great news for edge computing as more and more parallel tasks occur at the edge. It is also impressive to see integrated graphics performance continues to offer outstanding 3D graphics quality on up to four independent 4k60 displays. All this comes in scalable TDP classes ranging from 54 Watt down to extremely low-power configurations consuming as little as 10 Watt, explains Martin Danzer, Director of Product Management at congatec.

The feature set in detail

The new conga-TCV2 high-performance COM Express Compact modules with Type 6 pinout are based on the latest AMD Ryzen Embedded V2000 multi-core processors and will become available in 4 different flavors:

These modules offer up to double the compute performance per watti and double the core count over previous generations. Thanks to symmetrical multiprocessing capabilities, they also provide particularly high parallel processing performance with up to 16 threads. The modules feature 4MB L2 cache, 8MB L3 cache, and up to 32GB energy-efficient and fast dual-channel 64-bit DDR4 memory with up to 3200 MT/s and ECC support for maximum data security. The integrated AMD Radeon graphics with up to 7 compute units continues to support applications and use cases that need high-performance graphics computing.

The supported hypervisor and operating systems include RTS Hypervisor as well as Microsoft Windows 10, Linux/Yocto, Android Q and Wind River VxWorks. For safety-critical applications, the integrated AMD Secure Processor helps with hardware-accelerated encryption and decryption of RSA, SHA and AES. TPM support is onboard as well.