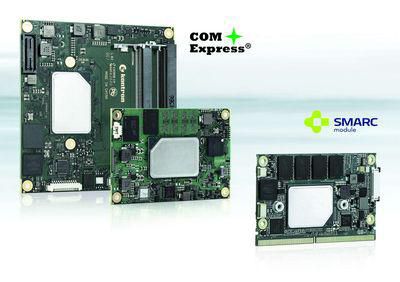 All three platforms support the broad scalability of the new Intel processors of the Atom x6000 Series and the Intel Pentium and Celeron N and J Series, which were designed specifically for IoT applications. The range extends from the cost-optimized 2-core to the high-performance 4-core solution with up to 3.0 GHz burst frequency.

The new generation comes with unrivaled performance and high energy efficiency resulting in an impressive performance-per-watt ratio. The modules are suitable for use in rugged, industrial and real-time environments. They combine the latest 10nm compute and Intel UHD graphics technologies with many integrated functions and I/O within a platform solution for IoT applications.

A 14nm platform control hub (PCH) is used, which significantly increases computing density and system performance. With up to four CPU and 32 GPU cores, up to 1.7x improvement in single-thread performance and up to 2x performance improvement in graphics compared to the previous generation can be achieved still within the same maximum power envelope of up to 12W TDP (Thermal Design Power) .

All three module solutions provide industrial-grade-by-design versions, specified for industrial temperature operation from -40 to +85 degrees Celsius, with in-band ECC memory as well as long term availability of ten years and beyond to meet the special requirements of applications for the defense and transportation market. The modules come with BSP support for Windows 10 IoT Enterprise, Linux and VxWorks 7.0.