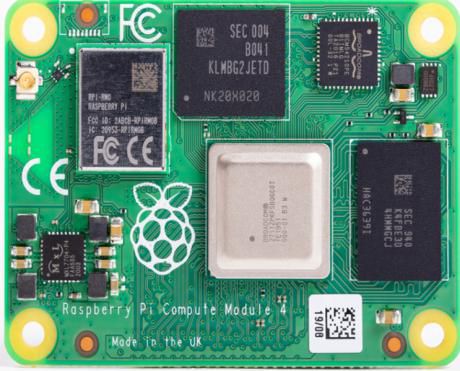 CM4 is a faster and more powerful System on Module (SoM) than previous models, offering a greater range of connectivity and memory options for design engineers building embedded solutions. Key features include a small form-factor, greater power efficiency, PCle support and a variety of multimedia interfaces.

The power and versatility of CM4 make it an ideal solution for Artificial Intelligence, the Internet of Things (IoT) and a wide range of home and industrial automation applications. Raspberry Pi products are increasingly being used in product design with an estimated 40-50 per cent of Raspberry Pi boards now being sold to industrial customers and OEMs. As the highest volume manufacturing partner of Raspberry Pi, Farnell has heavily invested in stock to ensure availability for volume orders, meaning that design engineers can integrate CM4 and other Raspberry Pi Compute Modules into new products with confidence.

CM4 is based on the acclaimed Raspberry Pi Model 4B single-board computer, with an updated form factor accommodating new interfaces such as dual HDMI, PCIe and Gigabit Ethernet, in a reduced footprint. Access to the processor interfaces and GPIO pins is provided via dual 100 pin high density connectors. For maximum flexibility, CM4 is available with different eMMC flash and DRAM density options, and with optional dual-band wireless connectivity. A 'lite' variant is available without the eMMC fitted, making it an ideal solution for cost-sensitive applications.

The CM4 is packed with performance and connectivity features including:

The CM4IO Board has been designed to simplify the development of new products using the CM4.  It is suitable for the evaluation and prototyping of new products, serving as a reference design to interface external devices to the CM4 and can also be embedded directly into end products.  The CM4IO Board can be used with the complete range of CM4 modules and features:
- Gigabit Ethernet connectivity with PoE support (requires separate Raspberry Pi PoE HAT)

- Two USB 2 sockets, with a header for two more sockets

Also available, for use with CM4 variants with an on-board wireless module, is the Compute Module Antenna Kit. The Kit includes an external antenna which has been pre-certified or use with the CM4, reducing additional compliance requirements when an external antenna is required within the design. It is supplied with a bulkhead fixture and a cable with a U.FL connector.

Lee Turner, Global Head of Semiconductors and SBC at Farnell explains:
- Ease of use is key to our customers: with its extensive documentation, mature software stack, and vast community the Raspberry Pi Compute Module series has always been a very popular product for embedded engineers.

- This new version of the Compute Module offers greater performance and connectivity as well as improved energy efficiency, and is simpler than ever to incorporate into products. With dual HDMI, PCI Express, a choice of RAM and eMMC memory options, and a dual-band option, design engineers can develop a broader range of applications, bringing their products to market faster than ever before.

Eben Upton, Chief Executive at Raspberry Pi Trading, adds:
- Since 2014, the Compute Module line has become an increasingly important part of Raspberry Pi’s offering, allowing our customers to leverage the cost, performance and stability of the Raspberry Pi platform in their own products, with their own form factors.

- Farnell have been at the heart of the Compute Module program, investing to ensure our customers can access the inventory they need when they need it, and providing unparalleled support through the element14 Community. Compute Module 4 extends the range with the power of Raspberry Pi 4, adding RAM density variants, optional wireless connectivity and an even wider range of interfacing options. We’re excited to see what people build with CM4 platform.