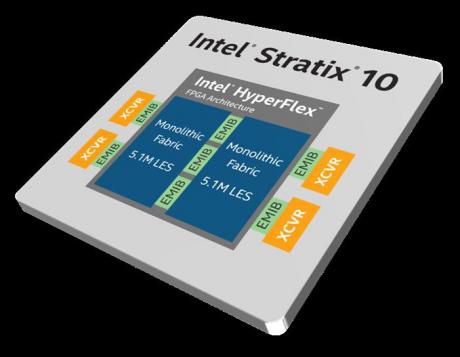 The Intel Stratix 10 GX 10M FPGA with a total of 10.2 million logic elements (LEs) is the first Intel FPGA to use EMIB technology to logically and electrically bond two FPGA fabric die together.

In addition, many large semiconductor companies, including Intel, develop their own custom prototyping and emulation systems and use them to verify their largest, most complex, and therefore riskiest ASSP and SoC designs prior to tape out. ASIC emulation and prototyping systems can help design teams to lower this design risk by a significant amount.

Consequently, Intel FPGAs including the Intel Stratix 10 FPGAs and even much earlier Stratix III, Stratix IV, and Stratix V devices have been used as the foundation in many of these emulation and prototyping systems for more than a decade.

ASIC emulation and prototyping systems support many activities associated with IC and system development including:

· Early SoC software development prior to the chip's manufacture

· Corner-case condition testing for both hardware and software

Emulation and prototyping systems are designed to save semiconductor vendors millions of dollars by helping them identify and eradicate costly hardware and software design bugs before the chips are fabricated.

It's far more costly to fix hardware design bugs after a chip has been manufactured - it usually requires an expensive respin of the design. It's even more costly to fix these problems once equipment has been manufactured and shipped to end customers. Because the risk is so high and the potential savings are so large, these prototyping and emulation systems deliver real, tangible value to IC design teams. As a result, use of these systems has become widespread because no design team leader can dare ignore such a prudent verification investment when the economic stakes are so high.

Use of the largest FPGAs allows big ASIC, ASSP, and SoC designs to fit into the fewest number of FPGA devices. The Intel Stratix 10 GX 10M FPGA is merely the latest in a line of large FPGAs used for these applications. This new Intel Stratix 10 FPGA enables the development of emulation and prototyping systems that can accommodate digital IC designs consuming hundreds of millions of ASIC gates. The 10.2 million LE Intel Stratix 10 GX 10M FPGA is already supported in the Intel Quartus Prime Software Suite with novel, specialized IP that explicitly supports ASIC emulation and prototyping.

The P tile used in the Intel Stratix 10 DX FPGA is the first component-level device to appear on the PCI-SIG System Integrators List for PCIe 4.0. The same P tile is also tightly integrated into the recently announced Intel Agilex FPGA, giving that device PCIe 4.0 compatibility as well.

The P tile used in both the Intel Stratix 10 DX and Intel Agilex FPGAs is yet another excellent example of how advanced manufacturing and production technologies such as EMIB have allowed Intel to bring a range of new products to market, and into full production, quickly.

Perhaps most important, the semiconductor and packaging technologies used to create the Intel Stratix 10 GX 10M FPGA are not simply targeted at building the world's biggest FPGAs. That's a (rather important) side benefit, but it's not the main point.