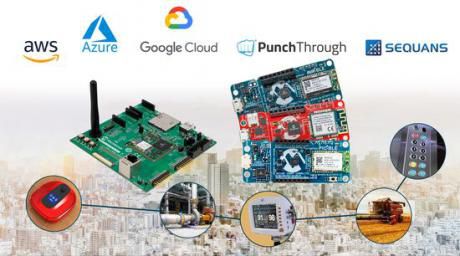 Due to the fragmented nature of the Internet of Things (IoT) marketplace, increasing project complexity and costs, today’s developers face more challenges in design decisions than ever before. These challenges lead to extended development times, increased security threats and failed solutions.

From the smallest PIC and AVR microcontrollers (MCUs) for sensors and actuator devices, to the most sophisticated 32-bit MCU and microprocessor (MPU) gateway solutions for edge computing, the company is now making it possible for developers to connect to any major core and any major cloud, using Wi-Fi, Bluetooth or narrow band 5G technologies - all while maintaining a strong security foundation through the support of its Trust Platform for the CryptoAuthentication family.

- Our latest partnerships with Sequans, utilizing its 5G technology, and Microsoft Azure extend our dedication to developing innovative solutions.

Each solution is designed to focus on ease of use and rapid development for smart industrial, medical, consumer, agriculture and retail applications, with embedded security in mind. The vast selection of connectivity technologies, combined with the wide range of microcontroller and microprocessor performance and peripheral features, makes these solutions scalable across a wide range of markets.

Microchip’s new IoT solutions build on the company’s vast ecosystem of development tools, centered around the MPLAB X Integrated Development Environment (IDE). Code generators such as the MPLAB X Code Configurator (MCC) automate and speed up the creation and customization of the application code for the smallest PIC and AVR microcontrollers, while the Harmony software libraries support all 32-bit microcontroller and microprocessor solutions.

On-board and in-circuit programming and debugging features are provided on the PKOB Nano, requiring only a USB cable to power, debug and communicate. Larger solutions are supported by universal programmers and debuggers, the MPLAB PICkit™ 4 and MPLAB ICD 4. The ATSAMA5D27-WLSOM 1 comes with a set of free Linux distributions and by mainlining Microchip’s patches to the Linux kernel, customers receive the full support of the open source community to create high-quality solutions.