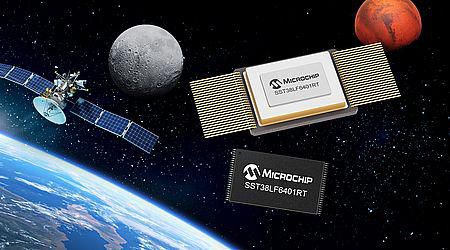 To reduce the time, cost and risk of developing spaceflight-qualified systems, designers may start with Commercial-Off-The-Shelf (COTS) devices that can later be replaced by their space-qualified, radiation-tolerant equivalent parts available in plastic or ceramic packages featuring the same pinout distribution.

- It offers the vital protection these space systems need for the most reliable digital processing where companion Flash memory is required to store the critical software code or bitstream that drives the complete system.

Radiation-tolerant up to 50 kilorad (krad) TID, even while the Flash is still biased and operating, the SST38LF6401RT device enables systems to operate in a broad range of space applications where they cannot afford any loss of code execution that could lead to severe defects and system loss.

It is an ideal companion to Microchip’s SAMRH71 Arm Cortex-M7-based radiation-hardened SoC processor and can also be used with the company’s RT PolarFire FPGAs to support in-flight system reconfiguration. The device has pinout distribution compatibility with its industrial version for easy transition to the space-qualified plastic or ceramic versions at the Printed Circuit Board (PCB) level. Voltage operation of the SST38LF6401RT ranges from 3.0 to 3.6 volts (V).

The radiation performance of the slightly modified devices is fully characterized and supported by a dedicated radiation report for each functional block. The devices are used in applications ranging from launch vehicles and satellite constellations to space stations. Designers can begin system implementation with easy-to-source COTS devices before swapping them out with pinout-compatible space-qualified equivalents in high-reliability plastic or ceramic packages.
16/12 2020
Produktlinks
Find din leverandør: