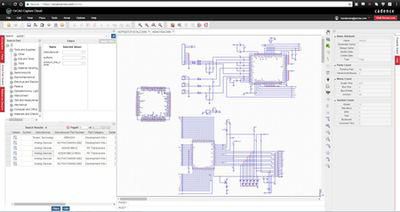 Arrow Electronics and Cadence Design Systems have expanded their ongoing collaboration, launching the Cadence OrCAD Entrepreneur package for OrCAD Capture Cloud on the Arrow.com design center. The new software tool suite cuts in half the time that it takes a designer to move from design to prototype, when compared to the traditional process of manually designing and simulating across separate systems.

- Thousands of design engineers already use OrCAD Capture Cloud on Arrow.com, says Arrow Chief Digital Officer Matt Anderson.
- OrCAD Entrepreneur goes even further, helping engineers bring their design ideas to life more quickly and easily than ever before. Arrow looks forward to continuing our successful collaboration with Cadence, and to bringing cutting-edge online design tools like OrCAD Entrepreneur to the engineers who rely on our digital platform.

Designers use OrCAD Entrepreneur to capture their system-level design in the familiar OrCAD Capture Cloud design environment, which is accessible directly from Arrow.com. They can then download the design onto their desktop for simulation and layout-moving seamlessly from design through advanced circuit simulation and PCB layout, and all the way to manufacturing.