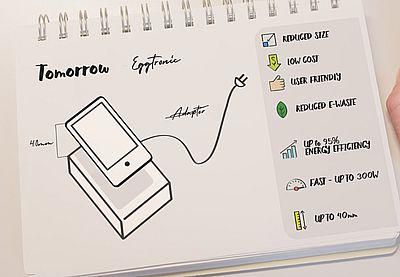 Traditional Qi wireless power is limited by distance (usually 5 mm), and maximum power (usually up to 30 W). E2WATT technology reaches up eight times further (to 40 mm) and delivers up to 300 W - a real breakthrough for inductive standards.

E2WATT wireless technology is powered directly from AC mains, without the need for an external power supply. The single-stage hybrid design minimizes losses compared with conventional double-stage wireless technologies to deliver significantly increased peak efficiencies of up to 95%.

- We developed the entire E2WATT wireless platform, from the concept to proprietary architecture and firmware, in order to overcome the limitations of standard AC power adapters and Qi wireless chargers, multiplying the number of applications and the usability of products based on Qi technology, says Igor Spinella, CEO and founder of Eggtronic.

- The Eggtronic team realized the limitations of legacy silicon chips and early discrete GaN with complex circuits and many discrete components. GaNFast power ICs are easy-to-use, ‘digital-in, power-out’ circuit building blocks which meant the expert team in Modena could focus on their proprietary, high-speed E2WATT topology and achieve a very fast time to market.

- We invented a hybrid AC wireless power solution which is both a power supply and a wireless charger, able to increase efficiency, power, distance, and reduce both size and complexity,” says Matteo Ovi, Head of B2B Sales at Eggtronic.
- With the new announcement, we can expand into new segments and products that were not possible before. Wireless laptops, TVs, sound systems, home appliances, and every other powerful electric and electronic device can be supplied wirelessly with the same efficiency of the best conventional wired AC adapters.

These extremely useful features ensure a reduction of the global cost of the solution, an increase of performance and usability and a smaller carbon footprint. Additionally, thanks to the proprietary receiving technology, the platform allows for a significant drop in receiver temperatures. The charging performance of modern smartphones and laptops are therefore improved, resulting in a better user experience.

E2WATT AC wireless power supply enables the creation of new scenarios. Several products based on the technology are currently being released while consumer, industrial and automotive solutions are in parallel development.
2/6 2021
Produktlinks
Find din leverandør: