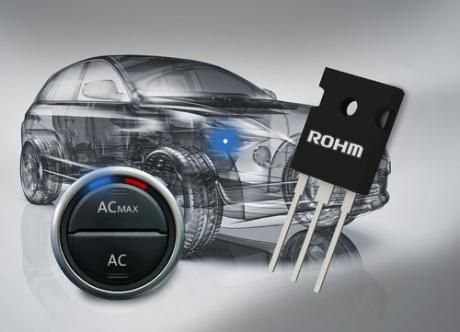 The new RGS series represents ROHM’s large lineup of AEC-Q101-compliant IGBTs in both 1200V-rated and 650V-rated variants. This series delivers class-leading low conduction loss that contributes to reducing size and to improving efficiency of applications.

In recent years, an increasing number of automotive makers are offering electric vehicles in response to growing environmental awareness and rising fuel costs. Increasing the number of electric vehicles also advances the need for electric compressors often driven with IGBT’s. Internal combustion engine vehicles have used the heat dissipated from the engines themselves as source to heat the cabin.

However, the demand for systems that use circulating warm water with PTC heater as a heat source has been increasing. IGBTs that operate at low frequency are commonly used in inverters and switches for these applications. Especially in electric vehicles, the power consumption of the compressor and heater affects the driving range, and, therefore, improved efficiency is desirable.

Another trend in this market is the increase in battery capacity to improve driving range. Especially in Europe, higher voltage batteries (800V) require power devices featuring low loss and higher withstand voltages, which increases the demand for both 650V-rated and 1200V-rated IGBTs.

The optimized device structure reduces VCE(sat) to 1.70V, which enables approximately 10% to 15% reduction in conduction losses compared to conventional products.
For electric compressors and PTC heaters, conduction loss is a more important feature than switching characteristics due to the low drive frequency.

With the four new IGBTs ROHM offers a total of 11 devices including 650V devices. This series has both simple IGBT type and built-in freewheel diode type, enabling customers to select the most suitable device.
14/5 2019
Produktlinks
Find din leverandør: