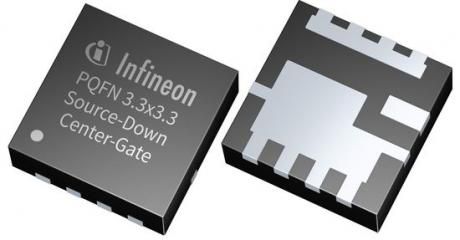 The new package concept connects the source potential (instead of the drain potential) to the thermal pad. Along with the enabled new PCB layout possibilities.

Infineon Technologies is focusing on system innovation with enhancements on component level by addressing the challenges of modern power management designs. The so-called Source Down is the new industry standard packaging concept. The first wave of power MOSFETs launched in this new package is the OptiMOS TM 25 V in a PQFN 3.3x3.3 mm.

The device sets a new industry benchmark in MOSFET performance, reducing on-state resistance (Rds(on)) and offering superior thermal management capability to the marketplace. The product is well-suited for a wide range of applications such as drives, SMPS (including server, telecom, and OR-ing) and battery management.

The new package concept connects the source potential (instead of the drain potential) to the thermal pad. Along with the enabled new PCB layout possibilities, this helps achieving ever higher power density and performance.

The location of the electrical connection remains the same, simplifying the drop-in replacement of today's standard Drain-Down packages with the new Source-Down package. For the Center-Gate version, the gate-pin is moved to the center supporting easy parallel configuration of multiple MOSFETs.

With its larger drain-to-source creepage distance, it is possible to connect the gates of multiple devices on a single PCB layer. In addition, moving the gate connection to the center leads to a wider source area for improved electrical connection of devices.