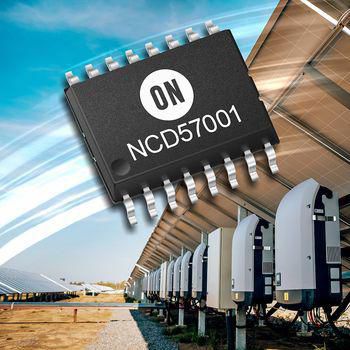 ON Semiconductor will be launching and exhibiting a new silicon-carbide (SiC) based hybrid IGBT and associated isolated high current IGBT gate driver at the PCIM Europe 2019 Exhibition and Conference in Nuremberg beginning May 7th.

The AFGHL50T65SQDC uses the latest field stop IGBT and SiC Schottky diode technology to offer low conduction and switching losses in multiple power applications, including those that will benefit from reduced reverse recovery losses, such as totem pole based bridgeless power factor correction (PFC) and inverters.

The device co-packages a silicon-based IGBT with a SiC Shottky barrier diode, resulting in an excellent tradeoff between the lower performance of silicon-based solutions and the higher cost of entirely SiC-based solutions. The high-performance device is rated for 650 V operation and able to handle continuous currents up to 100 A @ 25 degree C (50 A @ 100 degree C) as well as pulsed currents up to 200 A. For systems requiring greater current capability, a positive temperature co-efficient allows for easy and convenient parallel operation.

Modern electric vehicle applications not only use energy to travel but, in some cases store energy which may be used to power the home at peak times. This requires a bi-directional charger that must have high efficiency switching to ensure that energy is not wasted during the transfer. In this use case, the IGBT with external SiC diode is significantly more efficient than a MOSFET solution as there are no associated forward or reverse recovery losses.

The AFGHL50T65SQDC can operate with junction temperatures as high as 175 degree C making it suitable for the most demanding power applications, including automotive. It is fully AEC-Q101 qualified, further demonstrating its suitability for use in onboard EV and HEV chargers.

Alongside the new hybrid IGBT, ON Semiconductor will also be releasing and showing a new range of isolated high current IGBT drivers at PCIM. The NCD(V)57000 series is aimed at multiple power applications including solar inverters, motor drives, uninterruptible power systems (UPS) and automotive applications such as powertrain and PTC heaters.

The galvanic isolation is rated at greater than 5 kVrms which meets the requirements of UL1577; the working voltage is greater than 1200 V; and the devices guarantee 8 mm creepage distance to meet reinforced safety isolation requirements. NCD(V)57000 devices can source 7.8 A drive current and sink 7, which is more than three times the capability of some competing devices.

More importantly, they also have a greater current capability while operating in the Miller plateau which, when combined with their advanced protection features, makes them best-in-class IGBT drivers.
2/5 2019
Produktlinks
Find din leverandør: