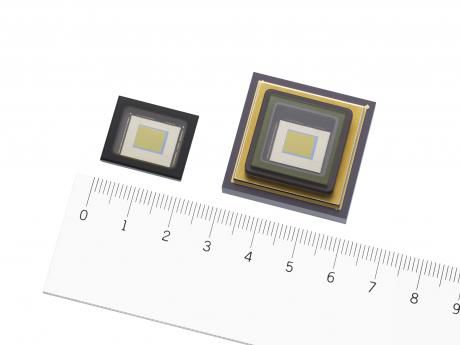 
The new products employ Sony’s original SenSWIR2 technology, in which photodiodes are formed on an indium gallium arsenide (InGaAs) compound semiconductor layer and are connected via Cu-Cu connection with the silicon (Si) layer which forms the readout circuit - a design which enables high-sensitivity over a broad range of wavelengths.

This breakthrough yields a SWIR image sensor that is compact yet capable of delivering seamless image capture over a broad range of wavelengths covering from the visible to invisible light spectrum in the short-wavelength infrared range (wavelength from 0.4um to 1.7um).

The recent demand to reduce manpower and ensure standardization in the industrial equipment field is driving a growing need for image sensors capable of capturing images in the invisible light spectrum of the short-wavelength infrared range.

However, traditional SWIR image sensors face manufacturing challenges in miniaturizing pixels and increasing pixel count, as well as various other issues including low sensitivity in the visible light spectrum and analog output that makes multifunctionality difficult. These factors have inhibited the penetration and increased applications of industrial cameras using conventional technology.

Going forward, Sony will propose these products for use in a wide range of industrial applications such as material selection, contaminant inspection, and semiconductor inspection, aiming to contribute to improved productivity.