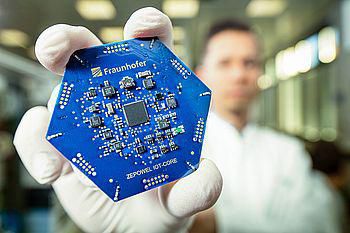 Whether they are protecting homes from intruders or keeping an eye on the machines in a factory, the use of sensors for monitoring and controlling purposes is on the rise. There are sensors that report when a window is opened suddenly and sensors that register when a machine is idling and wasting energy - name just a couple of examples.

With the aid of a microcontroller, these tiny sensor-nodes analyze the situation so that they can then issue a signal via a wireless unit and receive instructions.

The vast numbers of sensor nodes that have been brought into play so far are already consuming huge quantities of energy. Even as far back as 2013, the energy consumption of all networked devices globally was already equal to the total demand for electrical energy in Germany as a whole, according to a study conducted by the International Energy Agency in Paris.

Against this backdrop, eight Fraunhofer Institutes joined forces some time ago to form the Fraunhofer ZEPOWEL lighthouse project with the aim of developing highly energy-efficient sensor nodes. This year will see the introduction of two solutions that will approach the challenge presented by energy consumption from two different perspectives. One of these involves a self-sufficient sensor node that supplies itself with energy and collects environmental data on air quality, for example. The other involves a sensor node that records the operating state of machines, motors, or pumps in order to dramatically reduce their energy consumption.

- The sensor node hardware that we have developed in the project sets itself apart because it can be constructed modularly from various building blocks, allowing it to be adapted to a range of applications, explains Erik Jung, project team member at the Fraunhofer Institute for Reliability and Microintegration IZM - the institute that has pieced together the individual developments from the participating institutes to create a functional whole.

- A number of partners have contributed their insights on how to create efficient chips and control electronics, while others have offered their expertise on constructing small and efficient batteries and energy converters, and on secure wireless protocols.

Self-sufficient sensor for the smart city

A significant feature of the self-sufficient sensor node, known as the ‘smart city node’, is that it falls into a highly energy-saving deep-sleep mode when it is not needed. In this state, it consumes just a few nanowatts. It only powers up when it is activated wirelessly - so that it can measure particulate matter and transmit the measurements using wireless technology, for instance.

The smart city node is set to be installed in cars and buses over the coming months. Harnessing an energy converter, it obtains its power from the vibrations it experiences during journeys.

- These nodes are tiny and affordable, require zero maintenance, and can be used in many places - making it possible to establish a highly integrated measurement network. In future, sensors like these could also be deployed in agricultural applications to measure soil moisture and nutrient content at specific sites to a high level of precision, enabling farmers to irrigate and fertilize their land in a more targeted manner. This sensor-based precision farming is gaining momentum, adds Eric Jung.

Teaching machines to save energy

The second type of sensor node will be used in machines with motors, initially in machine tools that an industry partner is supplying. Even today, many machines that have to be started and stopped manually are still in use. Once an order has been completed, they continue to idle until someone presses the on/off button. In addition to measurement technology, the new sensor node now contains innovative power electronics for triggering 15 kilowatts at switching voltages of up to 850 volts.

The node is connected to the machine and can then power it up and down or operate it at the required speed.

- In the industrial world, there are still a lot of machines that are not speed-controlled, says Eric Jung. Replacing these with new machines would be hugely expensive, so it makes sense to equip them with the intelligent sensor node instead, he adds.

- At a rough estimate, carbon dioxide emissions across Germany would be reduced by around 20 percent if industry were to make extensive use of intelligent sensors with integrated controls. The ZEPOWEL lighthouse project has now shown how it can be done, says Eric Jung.