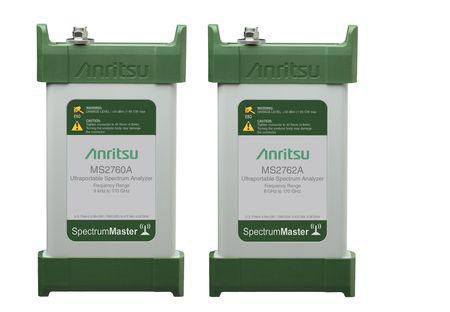 The Spectrum Master MS2762A high sensitivity models have typical DANL as low as -141 dBm from 6 GHz to 90 GHz, covering numerous bands starting from midway through the C band all the way through the E band. Above 90 GHz, the typical DANL performance remains superior at -136 dBm to 110 GHz; -129 dBm between 110 and 145 GHz; and -122 dBm between 145 and 170 GHz. This performance allows engineers to see more low-level signals, making the spectrum analyzers well suited for numerous applications, including radio astronomy in the D band.

The ultraportable design enables improved accuracy and sensitivity for mmWave measurements by allowing the USB spectrum analyzers to be connected directly to the device under test (DUT). This eliminates the need for calibrating external mixers or changing setups to view a different frequency band. Removing banded external mixers also simplifies test setup and conducting measurements.

Remote measurements can be made via USB extenders, making the ultraportable spectrum analyzers well suited for applications in which tests, such as antenna or path loss measurements, are conducted from a distance. Anritsu has designed the Spectrum Master MS276xA 170 GHz ultraportable spectrum analyzers with an advanced GUI that is highly responsive and operates much faster, as well.