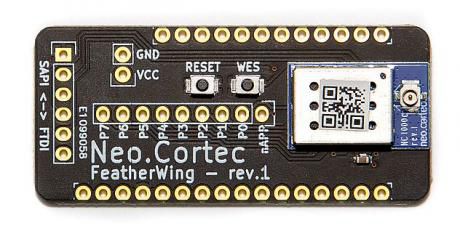 NeoCortec, the Danish developer and manufacturer of one of the world’s smallest, ultra-low-power bi-directional wireless mesh network modules, has announced a family of breakout prototyping and development boards that provide a simple and easy way for designers to begin working with NeoMESH, the extremly versatile, low-power, self-forming wireless mesh network.

Designed to operate either as a stand-alone development board, or in Feather Wing mode for compatibility with Adafruit Feather boards, the FWNCxxxx breakout boards cover the 2.4GHz, 868MHz and 915MHz frequency bands.

- The new breakout boards eliminate the need for engineers to create any PCB design themselves, enabling them to initiate Proof-of-Concept testing of the NeoMESH network protocol stack in a real application very quickly and at minimal cost. The breakout board is compatible with the Adafruit Feather eco system, and easily integrates with the Adafruit Feather microcontrollers, explains Thomas Steen Halkier, CEO at NeoCortec, and he continues:

- As an example, we have integrated our gateway software with the Adafruit Feather ESP-32 Wi-Fi device. This allows designers to produce a low-cost gateway design which can easily bridge between the low power mesh network and an IP based network or the customer’s preferred Cloud solution.

All NeoCortec modules share the same tiny 11x18x2.6mm footprint, so the target product does not need to change to support a full range of frequency bands. Average power consumption is as low as 20mA.

The new breakout boards provide easy access to GPIO to simplify customization. An U. FL antenna is the only additional component that needs to be added before testing can begin. Sensors and other peripherals can be soldered directly to the board if required.

NeoCortec is headquartered in Copenhagen, Denmark, and is owned by the Danish Private Capital Fund HP Holding A/S. Its patented technology is used worldwide in a broad range of applications based on IoT and Cloud-based sensor networks, including smart home and smart workplace, metering, security, agriculture, transportation, industry 4.0, medical and food distribution.