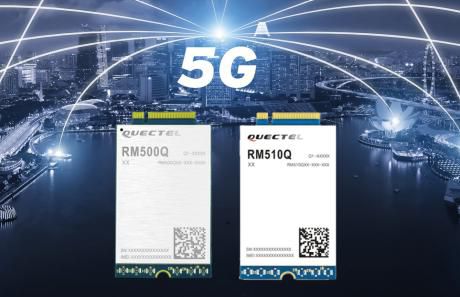 The RM500Q is a Qualcomm Snapdragon X55 based 5G module optimized specially for IoT/eMBB applications. Adopting the 3GPP Rel. 15 LTE technology, it supports both 5G NSA and SA modes. Designed in an M.2 form factor, RM500Q is compatible with Quectel LTE-A Cat 6 module EM06, Cat 12 module EM12 and Cat 20 module EM20, which will facilitate customers to migrate from LTE-A to 5G.

The RM510Q is the first industrial 5G mmWave module that fully complies with the 3GPP Release 15 5G NR standards. Quectel´s RM510Q module is specifically designed for IoT and eMBB applications. It is based on a Snapdragon 855 processor combined with the X55 5G modem and supports mmWave and Sub-6GHz frequencies in both 5G standalone (SA) and non-standalone (NSA) operation. For operation in LTE networks, a maximum of 2.5 GBit per second in the downstream (Cat 22) is promised; an upstream value has not been mentioned yet.

- The shift from LTE to the 5G network is an irreversible trend that is emerging, as 5G is the response to the ever-increasing volume of traffic. In view of the global effort, 5G also has the absolute potential to play a very important role in the IoT ecosystem. The 5G standard ensures all the necessary future requirements in terms of data speed, network capacity, and response time and data security. The presentation of the new 5G modules once again demonstrates Quectel's leadership in 5G R&D capacity and IoT innovation, says Ottmar Flach, General Manager Atlantik Elektronik GmbH.