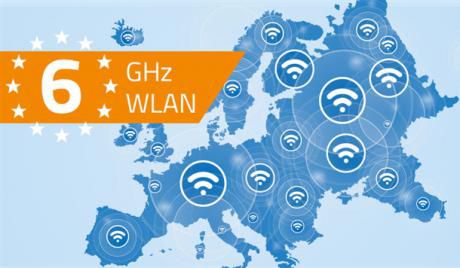 Europe is about to enter a new age of wireless. Last Friday, the European Electronic Communications Committee (ECC) approved the technical and regulatory framework for operating the 6-GHz band with Wi-Fi. The release of around 500 MHz in the lower range of the frequency band now doubles the spectrum available for wireless LAN. This is a historic step on the way to the wireless gigabit society, especially considering that the last time spectrum was added was more than 15 years ago. As early as mid-2021, consumers and businesses in Europe will be able to take advantage of Wi-Fi 6E (Enhanced), the marketing name for the improved standard.

The release of the 6-GHz band will be a huge boost to Wi-Fi over the next few years. The combination of more stable connections, significantly more bandwidth and very low latency will allow future Wi-Fi 6E networks to handle many times more users than today. Initial tests indicate transfer rates of up to 3.6 Gbps with latencies under 2 milliseconds. The latter are most exciting for IoT or VR applications, and could turn out to be a serious and cost-effective alternative to local 5G campus networks in industry.

In the EU, the ECC's proposal first has to be adopted by the EU Commission. That should happen as early as March 2021. About two months later—probably in May—the legal details will then be published in the Official Journal of the European Union. From this point in time, EU member states have six months to transfer the directive into national law.

At the same time, the European standardization authority has already presented a preliminary standard for Wi-Fi 6E. Even now, manufacturers can have their products approved by test centers commissioned by the EU and bring them to market. The final standard is likely to be published in early 2022.

From then on, the market will quickly pick up speed. We expect the first Wi-Fi 6E-capable devices such as smartphones and laptops to appear as early as 2021. At LANCOM, we aim to be one of the first manufacturers to offer Wi-Fi 6E access points, and even now we are working intensively on their development. We have decided for a tri-band solution so that Wi-Fi 6E access points from LANCOM will operate simultaneously in the 2.4-, 5- and 6-GHz bands. Users will benefit from an efficient, extremely versatile use of all available radio bands and thus of high-speed wireless LAN, which will open up completely new application scenarios for consumers and businesses.
26/11 2020
Produktlinks
Find din leverandør: