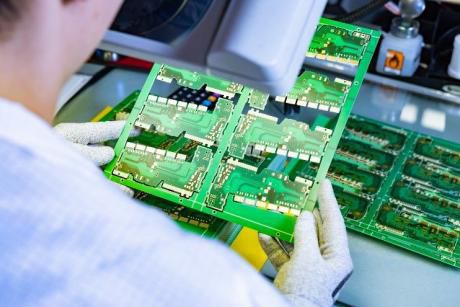 Printed circuit boards are the nervous system of all electronic devices. Whether for mobile devices or in the automotive, industrial and medical sectors. The areas of application are diverse, as is the production. Around 150 complex work steps are required for a single circuit board before it is ready for use.
- The high quality of our products is a matter of course at AT&S. Photos of the circuit boards are taken automatically during the manufacturing process and these are then run through image analysis software. Sometimes it happens that circuit boards are mistakenly recognized as 'faulty'. Unfortunately for no reason we can understand. That cost us additional time and resources, says Ulrike Klein, Head of the Data & Analytics department at AT&S.
The Know-Center developed an AI algorithm for the leading manufacturer of high-end printed circuit boards AT&S. This not only correctly recognizes the images of the circuit boards, but also provides an explanation of why a circuit board has been recognized as defective or intact. As a result, AT&S now has a transparent AI system at its disposal, which, after an intensive test phase, should deliver comprehensible and explainable results in the near future.
Technicians and artificial intelligence agree
- It was our aim to precisely identify the faulty circuit boards and to make the results comprehensible. We are pleased that we were not only able to implement the project successfully, but that our results also agree with the statements of the AT&S technicians, says Dr. Andreas Trügler, Head of the DDAI Module at the Know-Center.

- First our algorithm had to understand which circuit boards were faulty and why. To do this, the team trained a neural network and fed it with image data from correct and faulty circuit boards. Using methods from the 'Explainable AI' research field, we were also able to provide an explanation of why and where a circuit board was identified as defective.
Intelligent production environment using AI
Industry 4.0 or the so-called 'Smart Factory' is no longer a dream of the future. The use of smart and intelligent machines and applications ensures companies significant advantages in times of increasing competitive pressure.
More than ever, AI is the driving technology for innovative products and services in the age of digitalization. The manufacturing industry is grappling intensively with this, especially in the area of automation.

Stefanie Lindstaedt, Managing Director of the Know-Center explains:
- AI enables quality assurance at the highest level and saves companies costs and resources. Automated image recognition and analysis, which is finding its way into many industries, still show quality gaps. Another obstacle to firmly anchoring AI in companies is trust in these technologies. We are very pleased that we succeeded in overcoming both barriers in this project, says Stefanie Lindstaedt.
AT&S is one of the industrial partners in the COMET-Modul DDAI. The module, led by the Know-Center, is funded by the FFG and aims to develop safe, verifiable and explainable AI that also protects privacy. This is intended to make a significant contribution to acceptance and trust in AI. In the future, the plan is to work with AT&S and other industrial partners in this module to advance further projects in the direction of 'Trustworthy AI'.
About the know-center
The Know-Center is one of the leading European research centers for data-driven business and AI. Well-known companies have been supported in using data as a success factor for their company since 2001. For data analysis, the Know-Center relies on established Big Data and High Performance Computing (HPC) infrastructures.

As an integral part of the European research landscape, the center is very successful in handling numerous projects and contract research at EU and national level. The K1 competence center funded by COMET is also the leading training facility for data scientists in Austria and offers a range of Al training courses and advice for companies.

The majority shareholder is the Graz University of Technology, an important sponsor of domestic AI research, whose institutes handle numerous projects together with the Know-Center. In 2020, the Know-Center was the only Austrian center to receive the EU's iSpace Gold Award, which was only given nine times in the entire EU.