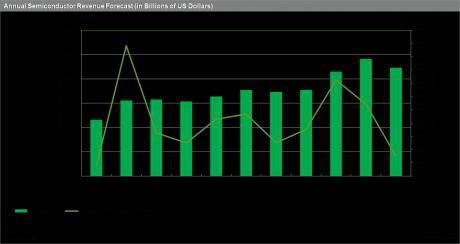 Dette er en prøve. Conditions in the global semiconductor market have deteriorated rapidly since the start of the year, with business information provider IHS Markit slashing its 2019 growth outlook by more than 10 percentage points.

The worldwide microchip industry is set to suffer a 7.4 percent drop in revenue this year, according to the latest figures from the IHS Markit Application Market Forecast Tool (AMFT). Revenue will fall to $446.2 billion in 2019, down from $482.0 billion in 2018.

This represents a major swing in the market outlook compared to the previous forecast in December, which anticipated the market would expand by 2.9 percent this year. A 7.4 percent decline will mark the semiconductor industry's biggest annual percentage decrease since the great recession year of 2009, when chip sales plunged by nearly 11 percent.


- After the chip industry attained a heady revenue expansion of 15 percent in 2018, many semiconductor suppliers in early 2019 remained optimistic that they could achieve modest growth this year, says Myson Robles Bruce, research manager, semiconductor value chain, at IHS Markit.

- However, the chipmakers' confidence quickly transformed into apprehension as they witnessed the depth and ferocity of the current downturn. The latest data indicates the semiconductor business now is destined for its worst year in a decade.

The precipitous nature of the downturn is due to increasingly soft demand, combined with a rapid rise in inventory levels in the first quarter. These events have impacted some semiconductor product segments more than others.

Recent concerns over DRAM market conditions, a harsh drop in average selling prices, and weak demand all served to slash DRAM revenue projections for 2019. In the NAND flash memory space continued oversupply has been responsible for an aggressive erosion in pricing.