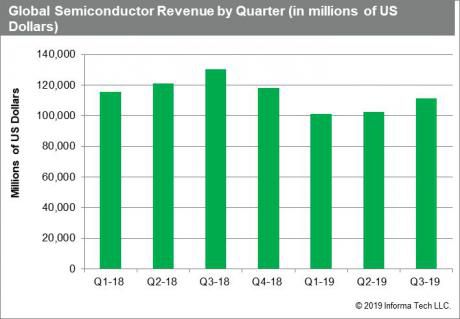 Global semiconductor revenue totaled $111.3 billion in the third quarter of 2019, down from $130.5 billion during the same period in 2018, according to IHS Markit |Technology, now a part of Informa Tech. This follows year-over-year declines of 15.3 percent in the second quarter and 12.4 percent in the first quarter. With three quarters in the books, semiconductor revenue is on track to drop by 12.4 percent for the full year.

In aggregate, semiconductor revenue for the first three quarters of 2019 declined by 14.2 percent compared to the first three quarters of 2018 - a $52 billion drop - as reported by the IHS Markit | Technology Competitive Landscaping Tool report. This massive decline was driven by weak conditions in the memory market, an area that now may be showing signs of recovery.

- Memory chips have been dragging down the semiconductor market throughout 2019, says Ron Ellwanger, senior research analyst at IHS Markit | Technology.

- Memory revenue growth has been undermined by severe excess inventory, as well as by weak demand from the cloud and enterprise server businesses. Although memory revenue declined on a year-over-year basis in the third quarter, it grew compared to the second quarter, indicating that conditions are recovering in the memory segment.

Memory revenue fell by 34.4 percent during the first nine months of 2019, compared to a 6.6 percent decline for analog chips, the second biggest-declining semiconductor product category.
Despite the recent positive development in the memory business, the semiconductor market’s woes are continuing in the fourth quarter. Global chip revenue is expected to decline by 7 percent in the fourth quarter compared to the same period in 2018.

Intel retained the No.-1 semiconductor ranking in the third quarter, with strong revenue growth of 16.3 percent compared to the second quarter. For the first three quarters of the year, Intel managed to limit its revenue decline to just 1.1 percent, compared to a 33.8 percent plunge for No.-2 ranked Samsung.

- Intel has continued to perform well in all application markets, particularly in the wireless segment, says Vladimir Galabov, principal analyst at IHS Markit | Technology.
- The company supplies modems for wireless devices, as well as FPGAs and ASSPs for cellular base stations, which have been enjoying healthy demand.

Intel also experienced growth in the solid-state drive (SSD) and memory markets, with a 37.2 percent increase in revenue compared to the second quarter of 2019, although it is a small player in these areas.

During the first nine months of the year, the top three memory suppliers - Samsung, SK Hynix and Micron - all saw their revenue decrease by at least 33 percent compared to the same time period in 2018.

Besides Intel, only one company among the top-10 generated growth: Sony Semiconductor Solutions Corp. Sony has been the shining star of the chip market this year, with revenue rising 27.1 compared to the first three quarters of 2018. The company moved into the top-10 ranking in the third quarter, gaining six places to rise to ninth place, up from 15th in the second quarter.

Sony’s CMOS image sensor business is thriving due to an increase in wireless handset sales and the expanding use of multiple cameras in each handset.
10/12 2019
Produktlinks
Find din leverandør: