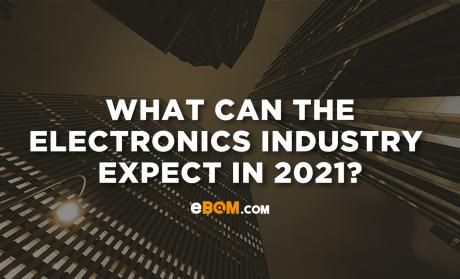 This year has been a tough time for all industries, especially the electronics sector. From COVID19 to trade wars, many businesses, small and big, did not make it through without redundancies, furloughs, minimising office space or even resulting to liquidation.

Within the UK, over 9.6 million jobs had been placed on furlough according to statistica, along with an unemployment rate of 4.1% for May to July, according to BBC. However, things might be looking up for 2021, especially within the electronics industry.

With the COVID19 outbreak in late 2019, the demand for medical applications has really taken off. The role of a medical sensor is to make therapeutical devices more effective and safer, while simplifying their operations. As stated in the name, medical sensors are the term used for sensors in medical environments.

According to Intrado Global Newswire, the global medical supplies market size is projected to reach USD 100 billion by 2021 from USD 78 Billion in 2019, at a CAGR of around 13.4% which is primarily from the increasing demand for medical applications during the virus outbreak in late 2019. As COVID19 cases increase, so will the demand for healthcare devices – resulting in higher demand for medical sensors.

Biomedical Engineering on the Rise

Many large manufactures halted production and started manufacturing ventilators to tackle this virus, these include Tesla, Mercedes, McLaren, Ford, and Siemens. Now more than ever, biomedical engineers are in extremely high demand to keep on top of safety measures and equipment such as ventilators. According to myfuture, employment of biomedical engineers is projected to grow 4 percent from 2018 to 2028.

However, due to this virus outbreak, the employment demand would have increased substantially. In 2021, with the understanding that COVID19 cases are still on the steady rise, so will the demand for biomedical engineers to contain the virus spread and save lives.

Many jobs over the last few years have been lost due to advanced robotics. These jobs include ticket dispensers, manufactures, bag check-ins, switchboard operators and bridge toll collectors. Within 2021, we can expect AI to influence the electronics industry to become more smart, efficient, and reliable. As AI has the software ability to think and learn like humans, we can expect many up and coming robotics to be functioned to do the job like a human’s ability.

Self-driving cars are a huge hit with the likes of Mercedes, Tesla, and Audi. According to tech world, Mercedes-Benz maker Daimler has teamed up with arch-rival BMW to develop self-driving car technology. Daimler previously announced that it aims to launch driverless robot taxis in the early 2020s.

The company has licences to test its self-driving vehicles on public roads in Germany, the USA and China, where it is granted permission to test its autonomous cars. However, his may lower employment demand for lorry drivers, bus drivers and taxis. The autonomous vehicle market will grow from $54.23 billion in 2019 to $556.67 billion in 2026, according to Allied Market Research estimates.

Given in the name, a virtual exhibition is a trade event which is run online. Given the circumstances with COVID19 circulatingthe globe, many events that were meant to be taking place this year were either postponed, cancelled, or switched to digital. It is already expected that next year, in 2021, most tradeshows will not be taking place due to safety reasons and lack of footfall.

Electronica in Munich, which usually sees thousands of visitors walking through the doors every day, have recently announced the event will be solely virtual this year, rather than physically taking place at a venue. It is expected that this will be a trend throughout 2021 in order to contain the virus and prevent further spread. Feel free to check out eBOM’s virtual tradeshow here https://ebom.com/directory/

Regarding COVID19, depending what pathway the virus takes will very much affect how successful the supply chains, events, distributors, manufactures and suppliers of the electronics industry will be.

-The future will very much depend on how much social mixing resumes, and what kind of prevention we do, says Joseph Wu, a disease modeller at the University of Hong Kong.